Communicating with Dogs
What Does ‘No!’ Really Mean to Your Dog?

A key component of success when communicating with dogs is really understanding the Dog’s Point of View. One of the most common conversations I have with new clients is their use of the word ‘No’ when applied to their dogs behaviour, whether that be in the home or out on walks.  When I ask them how they deal with certain situations, they tell me ‘I say No! and he/she stops’.

If you think about the circumstances in which you  usually use this word in relation to your dogs behaviour, it’s obviously going to be when they’re doing something you want them to stop doing, go figure! Therefore it’s highly likely  when you say ‘No!’ it’s said in a sharp tone, with a high degree of negative energy and emotion behind it, because you want your dog to stop.

If you are interested in learning more about the impact of our emotional energy on our canine family members, and how we can use it to help improve our relationships and their behaviour, you might be interested in a book I’ve recently published with my colleague Janeen Warman of Human Hound Healing.  You can find Emotive Energy Balancing – Teaching and Communicating with Energy Awareness for sale on Amazon here.

So back to that word ‘No!’ If you look around at your partner, your children, your dog … what are they all doing? What would they all do if you suddenly shouted angrily ‘No!’ right now… do you think they would react? (I’m not going to ask you to try it though because that wouldn’t be nice for your dog 🙂 )  Do you think they would stop what they were doing? Of course they would, and this is why the majority of people believe their dog ‘understands’ the word No, because it has an impact on their behaviour.

But the question is, when you say ‘No’ to your dog, what does it really mean to them?

Consider this for a moment, if I say ‘No!’ to you, how do you know what it means? Obviously you already understand what ‘No’ means in our language and I imagine you would think of a scenario whereby you’re doing something or about to do something and the word ‘No’ means you should stop doing it or you’re not allowed to do it.  As humans however, we have the mental capacity to analyse and extract information from a situation to the exclusion of anything that’s irrelevant.

For example, if you were sat in a chair absorbed in reading a book and without looking you reach for your glass to take a drink.  I can see you’re about to knock the glass over instead of picking it up and I might shout ‘No!’ or ‘Stop!’ loudly to prevent that happening.

Would you think I had said ‘No!’ to tell you to stop sitting in the chair?

Would you think I had said ‘No!’ to tell you to stop reading the book?

Of course you wouldn’t, you would quickly realise and understand that I had said ‘No!’ to stop you knocking your glass over.  In addition to this you would clearly understand that I wasn’t shouting at you because you were doing something wrong, but merely to prevent the accident from happening.

Our dogs cannot do this. Of course, the answer is chewing the remote, but since your dog is doing both things simultaneously how do they know which one is ‘bad?’ and which behaviour it is exactly that you want them to stop? Can you see how this could be confusing to them?

It can often be the case, that dogs who hear the word ‘No!’ shouted at them a lot of the time, not only find the experience stressful, but also quite confusing.  No doesn’t give them any information on what you actually want them to do.  Dogs who get told ‘No!’ regularly can even stop offering behaviours at all in some cases, they simply shut-down because they’re afraid of doing something wrong.  They might even ‘misbehave’ more (jump up, bark, chew, run away etc) because they’re confused and stressed and don’t understand what they’re ‘supposed’ to be doing.

Think about the variety of situations the use of the word ‘No!’ might be said in relation to our dogs behaviour:

That’s a whole lot of very different scenarios… how do you teach them what ‘No’ means in each of those varying situations?

It’s also important to mention here as well that bellowing the word ‘No!’ in an angry or intimidating way, especially with fearful, anxious or reactive dogs (and especially by men) can be incredibly frightening for them. Add to this the scenario where a dog is already experiencing a heightened level of fear or anxiety (for example a dog that is reactive on walks or toward visitors in the home) you shouting ‘No!’ can create even more negativity and anxiety toward whatever trigger is causing them concern.  This means they will probably be even MORE fearful and anxious of that trigger in future, because it causes their person to bellow ‘Nooooo!!!’ at them whenever the situation presents itself.

Something else that many people don’t realise is that the word ‘No!’ can actually be reinforcing to a dog that doesn’t get much attention in other ways (the same can be true of children.)  When they’re being good and quiet and doing all the things we like, we don’t pay them any attention.  We fail to let them know that they are being so good!  We don’t reinforce those good behaviours, we just get on with all the other things we need to do, so from the dog’s point of view (and the child’s) those behaviours aren’t really very rewarding.

However,  when they ‘play up’ or demand our attention, hey presto they get it! Even if it’s negative and we’re a bit cross or frustrated, from a dog (or child’s) point of view, any attention is better than no attention!

What do our dogs (and children) learn from this? If you act up, be annoying, do things that you know will get you attention (‘bad’ things) then you are almost guaranteed to get it.  That’s some pretty strong consequential learning don’t you think?  Add that to enough repetition and you have an annoying, demanding, ‘naughty’ dog (or child.) Tramp Being Good for a Change! 😉

By being conscious of when our dogs are doing things we like, and capturing those moments, reinforcing with attention, praise or rewards we can increase the likelihood of those behaviours becoming stronger and being repeated.

Another common scenario when people can make the mistake of using the word ‘No!’ at the wrong time (probably without realising it) is when their dog is actually doing the right thing.  Think about a dog that doesn’t come when called, maybe they run off to see another dog or chase a small furry creature. Usually this scenario ends up with the dog coming back eventually after they’ve had their fun, only to return to their person to be grabbed harshly by the collar and shouted at with something like ‘NO! BAD DOG.’ and sadly even smacked sometimes (unfortunately I have seen this myself out on walks far too many times)

What did the dog learn here? Coming back to my person is not a very nice experience, coming back is a bad!  What do you think the chances are of this dog choosing happily to run back to their person the next time they call them?

This scenario of telling the dog off when it’s actually doing the right thing can be played out in many different situations.  It can often result in a dog that’s not only confused about what it should or shouldn’t be doing, but one that also finds all these situations very stressful because they create a loud, shouty human.  This alone can add to their erratic, out of control behaviour resulting in a spiral of negativity and misery for everyone involved.

So what can you do if you find yourself saying ‘No!’ A lot?

Dogs are likely to learn quicker and understand more clearly when we tell them what we want them to DO rather than what we want them to stop doing (the same is actually true for people too.)  Whilst this is the approach I recommend people to take, it would be unrealistic to try to get everyone to stop using the word ‘No!’ completely.  It takes practise and even then, those two little letters pop out without us even thinking.

We use the word ‘No!’ automatically because it has meaning to us.  It’s the first thing that comes to mind, so it can be very difficult NOT to say it.  Instead of trying to work against a communication that comes naturally to us, I try to encourage clients who have already developed the ‘No!’ habit to spend ten or fifteen minutes making a list of the times they use the word ‘No!’ and the behaviours their dog is doing at these times.  Then I recommend they embark on the following process:

1. MANAGE YOUR DOGS BEHAVIOUR WHILE THEY LEARN ALTERNATIVE SKILLS
Start to practise being proactive rather than reactive in all problem situations. For example:

2. TEACH YOUR DOG WHAT YOU WANT THEM TO DO INSTEAD
Teach your dog the skills they need in the situations you find yourself saying ‘No!  If they’re consistently and repeatedly acting out with inappropriate behaviours (or should I say behaviours that are inappropriate for them to be doing as part of their co-existence in our human world) then they either do not know the appropriate behaviours or you haven’t taught them that skill with enough consistency for them to be able to apply it in that situation.

Some more appropriate skills they may need to learn could be:

3. DEVELOP & PRACTISE YOUR HABITUAL RESPONSES
Start, right now, to practise and embed your habitual responses so that when your dog’s behaviour elicits a ‘No!’ from you, you consciously use the word ‘No’ as a communication instead of a reprimand.  So instead of shouting at them use more of a matter of fact tone but then immediately follow it with a ‘doing’ action request.

Personally I rarely say ‘No’ to my dogs, but my brain has had a lot more practise than most, and even then it still slips out sometimes! Just remember though, all these ‘doing’ behaviours that we want to add onto the end of that ‘No’ when it slips out, are skills your dog needs to learn.  They need to be taught first so your dog clearly understands what you mean for them to do, and then practised often in a variety of situations before they will be able to give you a more appropriate response within the distracting ‘real life’ situations that you need them. 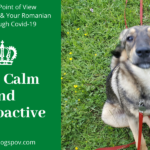 Supporting You & Your Romanian Dogs Through Covid-19 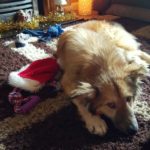 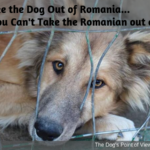 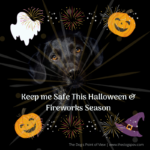 Tips & Advice for your Anxious Dogs during Halloween & Fireworks Season 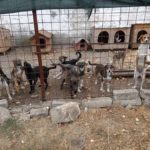